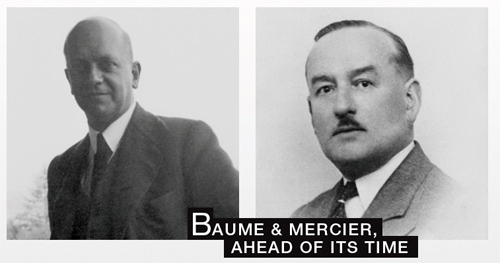 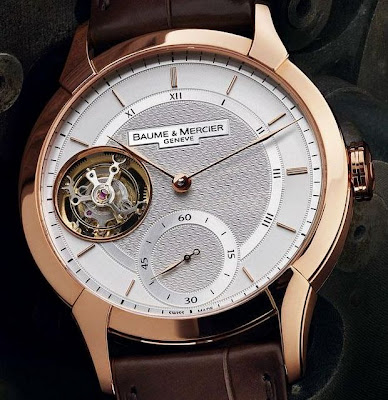 
Baume et Mercier  is a Swiss luxury watchmaking company founded in 1830. It is owned by Richemont, and with Cartier and Piaget they make up the core of the group. This company is represented in 75 countries and produces around 200,000 watches a year. The most important markets are in Europe, especially Italy, Spain and France. Baume et Mercier is distributed by 220 exclusive[vague] retailers worldwide and has established itself as a manufacturer of sporty chronographs.

n 1830 the Baume family opened one of the first comptoirs horlogers (watch shops) in the Swiss Jura region in the village of Les Bois. “Frères Baume” soon became a major watch company, thanks to the commercial flair and rigorous industrial methods of the two brothers, Louis-Victor and Joseph-Célestin Baume, who strictly followed their motto: “Accept only perfection. Only manufacture watches of the highest quality.”

From the beginning, the objective of the “Frères Baume” company was to make high-quality traditional watches enriched by various technological breakthroughs of the era. The Baume family were equally innovative commercially, when one of the two brothers, Joseph-Célestin, set up a branch in London named “Baume Brothers”. Baume Brothers rapidly expanded throughout the British Empire, from India through Singapore and Burma to Africa, and even became a pioneer in selling watches in emerging markets such as Australia and New Zealand.

By 1876, when the second generation took over, “Frères Baume” had already acquired a solid international reputation for its simple watches, chronographs and Grand Complication models, including minute repeaters, calendars and tourbillons. The company management was again shared by two brothers, sons of the co-founder, Louis-Victor. Alcide Baume was in charge of production in Les Bois, while Arthur Baume was based in London and handled international marketing. The company soon set up branches in Geneva, Switzerland and Philadelphia, in the United States.

Baume watches earned ever-growing success and recognition under the impetus of the second generation.

Baume watches also set accuracy records in timekeeping competitions, and particularly the timing trials run by Kew Observatory near London. When the Baume company first competed in the Kew Teddington competition in 1885, three of its watches were ranked among the top seven, and the following year, four of them won awards.

In 1892, Baume earned the highest score in the competition (91.9 points out of a 100) with a split-second chronograph, an all-time record that remained unbeaten until over a decade later. Up to the early 20th century, the brand won a steady succession of prizes for its simple and complicated watches, all equipped with the most advanced technological features. In London, Arthur Baume became a leading figure in the United Kingdom. He was named a knight of the Legion of Honor, and later became an officer, and was twice decorated by French President Poincarré in person.

The King of Belgium made him a Grand Officer of the Order of Leopold II, and he was received at the official state dinner given in honor of the King of England, George V, and Queen Mary. A member of the Royal Geographical Society, Arthur Baume was appointed president of the British Horological Institute in London.

The end of World War I in 1918 brought sweeping changes in industry, the arts, and society in general. Women’s emancipation led them to wear jewelry watches as brooches, long necklaces or on the wrist, a trend made possible by the miniaturization of watch movements.

After proving its use in a military context, the wristwatch gradually took over from the pocket watch as the masculine timepiece of choice. Baume witnessed the emergence of a new generation, and the young William Baume, a great visionary and an accomplished watchmaker, was eager to take advantage of the new opportunities afforded by the ebullient mood of the era. Having by then settled in Geneva, he decided to partner with a colorful figure named Tchereditchenko, who subsequently adopted his French mother’s family name and became known as Paul Mercier. Born in Odessa to a Russian father, Paul Mercier was a passionate and refined individual, a dedicated art-lover who spoke seven languages and was endowed with exceptional business acumen.

Despite their very different yet complementary temperaments, the two men, shared the same vision of contemporary watchmaking, and decided to join forces in 1918 to create Baume & Mercier. William Baume handled technical aspects, while Paul Mercier was in charge of design and the commercial side of the business. Together, they established a full-fledged watch manufacture in Geneva, making top-quality watches as well as movements that were exported to the United States.

In 1919, barely a year after the company was set up, Baume & Mercier movements were awarded the “Poinçon de Genève” or Geneva Hallmark, the highest token of fine craftsmanship in watchmaking. A year and a half later, Baume & Mercier had become the watch brand producing the largest number of movements certified by this prestigious quality label.

On March 21, 1921, the Department of Trade and Industry of the Republic and Canton of Geneva awarded “Messrs Baume and Mercier, watchmakers in Geneva”, a diploma “certifying that their company ranks first in the number of pieces that received a hallmark at the official government office for voluntary testing of Geneva watches in 1920.”

In 1924, Baume & Mercier appeared in the Davoine official watch industry directory, the benchmark register of watchmaking companies, as one of the four Geneva-based manufacturers alongside Patek Philippe, Vacheron Constantin and Haas Neveux. Focusing firmly on high-quality watchmaking combining technical excellence with a contemporary look, the company enjoyed swift success despite the major crises that hit the Swiss watch industry in the early 1920s and after the 1929 stock market crash.
Chronographs and Marquise

The period between the late 1930s and the 1950s saw the baton being passed on to a strong new personality at the head of Baume & Mercier, the Count Constantin de Gorski.

William Baume withdrew from the company in 1935 for health reasons, and Paul Mercier sold his shares in 1937 to the Ponti family,famous jewelers and goldsmiths from northern Italy.

During the 1940s and throughout World War II, Baume & Mercier chronographs became watches of choice that are still highly sought-after collector’s items today. After the war, Baume & Mercier launched one of its most successful models: the Marquise.

This jewelry watch, set in a “bangle” type bracelet, asserted itself as the leading post-war ladies’ model and remained a brand best-seller until the early 1960s.

In 1952, Baume & Mercier acquired a new production facility for its chronographs by buying up the C.H. Meylan factory in the village of Le Brassus, in the Joux Valley.
PHI becomes the brand emblem

Considered since Antiquity to be the “golden section” representing perfect proportions, the PHI appeared from then on as the Baume & Mercier logo on all its watch dials. It was from this time onwards that Baume & Mercier acquired its status as an affordable luxury brand, a positioning it continues to uphold. The brand also accentuated its avant-garde, innovative approach, especially during the 1970s.

In 1971, Baume & Mercier was one of the first brands to adopt the new electronic tuning-fork movements, forerunners of quartz, in its Tronosonic model.

In 1973, this was followed by the innovative Riviera model, one of the very first steel sports watches featuring an original twelve-sided design. The Riviera was to become Baume & Mercier’s best-seller and its flagship model for 20 years.

In 1972, the brand caused a sensation in the field of ladies’ watches by introducing the Mimosa and Galaxie models, both of which won the Golden Rose at the Baden-Baden international watch and jewelry competition held in Düsseldorf, Germany – the most important contest of its kind at the time.

In 1973, Baume & Mercier once again earned the supreme Golden Rose distinction for its splendid Stardust model featuring an onyx dial surrounded by 138 diamonds.

The 1980s witnessed the global success of the Linea ladies’ model, and in 1988 the destiny of Baume & Mercier took a new turn when the luxury group that would later become Richemont bought up both Piaget and Baume & Mercier.
Newfound independence

The brand displayed noteworthy creativity, introducing a wave of models in its jewelry, classic and sports watch ranges: Catwalk (1997) revived the cuff-watch; Capeland (1998) played the adventurer; and Hampton (1994) became a classic rectangular steel watch and the brand’s new flagship model.

In 2002, Baume & Mercier took a further step towards autonomy by opening its own workshops in Les Brenets, in the Swiss Jura. This represented a genuine return to roots in more than one way: a return to production in the Jura, the cradle of the Baume company (although the Baume & Mercier headquarters remained in Geneva), and a return to a production mode known as établissage (or project management) and used by the “Frères Baume” throughout the 19th century, but combined with a full set of modern advantages.

The company continued along its successful path with new models such as Classima Executives, Diamant, iléa, as well as the Haute Horlogerie William Baume collections, and a number of sporting and sophisticated models interpreted in Riviera or Hampton versions.

Loyal as ever to its origins, Baume & Mercier continues to offer a range of authentic timepieces with a contemporary feel, that embody the attention to detail, the high quality standards, and the respect for the rules of fine craftsmanship on which the company has built its international reputation since 1830.